History of the Estate

History of the Estate 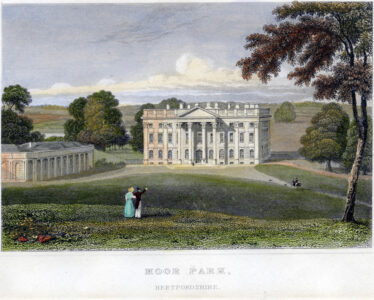 The area known as Moor Park was part of a much larger 3000-acre private Estate, purchased by Lord Leverhulme in 1919, including the area that is now Moor Park Golf Club, together with Moor Park Mansion (the golf clubhouse) and Sandy Lodge Golf Club.

In 1922 development began of 288 acres of parkland. Architects were commissioned to design the infrastructure for the development of dwellings and to supervise the design of new houses. Roads and sewers were constructed and houses were erected, spreading south and west from the Metropolitan Line station of Sandy Lodge Halt (in 1950 it became Moor Park station).

Construction of housing stopped at the outbreak of war, but once the restrictions on building materials were removed in 1954, the development of the Estate was resumed.
Two extracts from 1920s brochures, distributed when Moor Park was first developed as a
residential estate, give a sense of its unique character:

‘A residence may be obtained in Moor Park at an approximate cost of £1,750 with two large reception rooms and four or five bedrooms, domestic offices and garage’.

When the Moor Park residential Estate was first developed in the 1920s and 1930s, its distinctive character was established by means of a few basic principles:

These developments were carried out through Moor Park Limited and (to a small extent) Kewferry Hill Estate Co. Ltd, both subsidiaries of Lever Brothers Limited. Moor Park Limited went into voluntary liquidation in 1957 and in the following year, with the assistance and agreement of Lever Brothers, Moor Park (1958) Limited (the present Company) was formed as a management company operated on behalf of the Members. The private roads and open spaces were transferred to the Company as well as the benefits of the restrictive covenants designed to preserve the character of the Estate. The covenants are included in the deeds of all properties.

Over the years, demand for living in Moor Park is equally as high. With just over 500 residential houses, the unique character and openness sets it apart from the surrounding areas and the Estate is highly sought after. The Conservation Area guidelines governing the architecture and integrity of buildings, including not allowing the sub-division of plots, has ensured that living in Moor Park comes at a premium. Between 2018-2020, the total number of sold properties was only 32, with an average value of approximately £2m.

The history of the Moor Park Estate has been published in a booklet, Moor Park, by Alan Jamieson, a copy of which is available at £4.00 from the Moor Park office or download here.